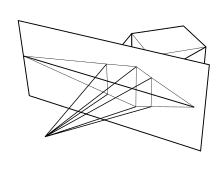 A cube in two-point perspective

Rays of light travel from the object, through the picture plane, and to the viewer’s eye. This is the basis for graphical perspective.

Linear perspective always works by representing the light that passes from a scene through an imaginary rectangle (realized as the plane of the painting), to the viewer’s eye, as if a viewer were looking through a window and painting what is seen directly onto the windowpane. If viewed from the same spot as the windowpane was painted, the painted image would be identical to what was seen through the unpainted window. Each painted object in the scene is thus a flat, scaled down version of the object on the other side of the window.[1] Because each portion of the painted object lies on the straight line from the viewer’s eye to the equivalent portion of the real object it represents, the viewer sees no difference (sans depth perception) between the painted scene on the windowpane and the view of the real scene. All perspective drawings assume the viewer is a certain distance away from the drawing. Objects are scaled relative to that viewer. An object is often not scaled evenly: a circle often appears as an ellipse and a square can appear as a trapezoid. This distortion is referred to as foreshortening.

Perspective drawings have a horizon line, which is often implied. This line, directly opposite the viewer’s eye, represents objects infinitely far away. They have shrunk, in the distance, to the infinitesimal thickness of a line. It is analogous to (and named after) the Earth’s horizon.

Any perspective representation of a scene that includes parallel lines has one or more vanishing points in a perspective drawing. A one-point perspective drawing means that the drawing has a single vanishing point, usually (though not necessarily) directly opposite the viewer’s eye and usually (though not necessarily) on the horizon line. All lines parallel with the viewer’s line of sight recede to the horizon towards this vanishing point. This is the standard “receding railroad tracks” phenomenon. A two-point drawing would have lines parallel to two different angles. Any number of vanishing points are possible in a drawing, one for each set of parallel lines that are at an angle relative to the plane of the drawing.

Perspectives consisting of many parallel lines are observed most often when drawing architecture (architecture frequently uses lines parallel to the x, y, and z axes). Because it is rare to have a scene consisting solely of lines parallel to the three Cartesian axes (x, y, and z), it is rare to see perspectives in practice with only one, two, or three vanishing points; even a simple house frequently has a peaked roof which results in a minimum of six sets of parallel lines, in turn corresponding to up to six vanishing points.

In contrast, natural scenes often do not have any sets of parallel lines and thus no vanishing points.

The earliest art paintings and drawings typically sized many objects and characters hierarchically according to their spiritual or thematic importance, not their distance from the viewer, and did not use foreshortening. The most important figures are often shown as the highest in a composition, also from hieratic motives, leading to the so-called “vertical perspective”, common in the art of Ancient Egypt, where a group of “nearer” figures are shown below the larger figure or figures. The only method to indicate the relative position of elements in the composition was by overlapping, of which much use is made in works like the Parthenon Marbles.

This site uses Akismet to reduce spam. Learn how your comment data is processed.