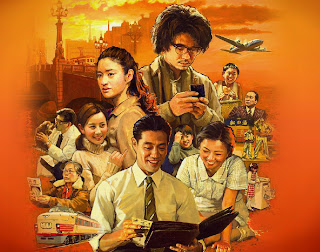 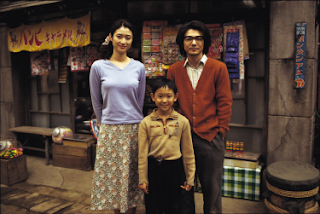 The plot takes place in a small community in post-war Tokyo, and follows the interweaving story threads of a number of the community’s residents over the course of a single year as Tokyo Tower is being built.Norifumi Suzuki, consistently called “Suzuki Auto” by several of the other characters, runs a small auto repair shop, where he lives with his wife, Tomoe, and son, Ippei. Mutsuko Hoshino, a young girl from Aomori Prefecture comes to live with them and work as Suzuki’s apprentice, having applied for the position as a one-year work opportunity.

Though Mutsuko is initially shocked and upset at finding Suzuki Auto to be nothing like her expectations – a small auto repair shop where she’s expected to do manual labor rather than a large company where she would be doing white-collar clerical work – she soon comes to enjoy her new life. Consistently called “Roku” by the Suzukis, she quickly becomes like a family member to them. Later in the film, she is given train tickets back to Aomori for the new year as a Christmas present, but she does not want to go back believing that no one in Aomori wants her to return. However, Tomoe reveals to her the letters she has been receiving from Mutsuko’s mother and have kept secretly in accordance with the mother’s wishes. Touched, Mutsuko chooses to return home to Aomori excited to be seeing her family again. She happily waves to the Suzukis, whom she thanks for a great year while leaving.